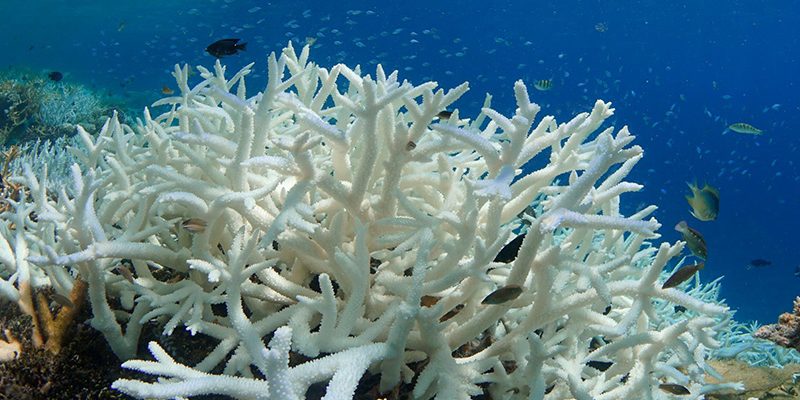 Living in the Middle East, we are lucky enough to enjoy year-round sunshine and beautiful beaches where we can easily explore the underwater world and the coral reefs scattered across the coast. Unfortunately, coral reefs around the world are dying due to damaging activities such as coral mining, pollution, overfishing and climate change – to name just a few issues. The increasing temperature of our oceans is one of the largest causes of coral bleaching, which if severe, kills coral. Coral gets its various colours due to the symbiotic relationship it has with algae, its main source of food. A change in living conditions, such as the increasing water temperature, causes coral to become stressed and release the symbiotic algae and in consequence the coral turns completely white in colour and becomes weak and fragile. This process is known as coral bleaching.

The United Arab Emirates (UAE) reefs are subject to pressures from urban and industrial encroachment, such as dredging and oil exploration activities, as well as climate change. Historically, coral reefs of the UAE were among the most extensive in Northeastern Arabia. Records from the 1960s and 1970s describe reefs as extending across most of the Arabian Gulf coast, occupying hundreds of hectares of near-shore waters, from Western Abu Dhabi all the way up to Ras Al Khaimah (Kassim, 1969; Kinsman, 1964; Purser and Evans, 1973; Shinn, 1976).

Coral reefs were also widely distributed across the Northern Emirates and along the UAE’s East coast, in the Sea of Oman (Purser and Evans, 1973). Over the past several decades there has been rapid degradation of coral reefs across the UAE; channelization, reclamation, and port development, associated with the oil boom, has had a huge impact on reefs, particularly in Abu Dhabi during the 1970s and 1980s (Burt, 2014; Evans et al., 1973; Murray, 1970; Neuman, 1979). Yet reefs throughout most of the country remained relatively intact during  this period (George and John, 2000b; John and George, 1999; Purser and Evans, 1973).

In the late-1990s there were two major thermal coral bleaching events (1996 and 1998) that impacted reefs throughout the Southern Arabian Gulf and resulted in the loss of 90% of coral in many areas (Riegl, 2002; Sheppard and Loughland, 2002). Formerly dominant reef structures were decimated throughout the entire country during these events, surviving only around offshore islands and in isolated pockets across Dubai and Sharjah (George and John, 2000a; Riegl, 2002; Sheppard and Loughland, 2002).

Although there have been isolated signs of recovery in some areas (Burt et al., 2008), recurrent bleaching events in subsequent years, and increasing pressure from coastal development have meant that the reefs continue to degrade. (Burt, 2014; Burt et al., 2011a, 2016; Riegl and Purkis, 2012a).

Apart from global warming, human impacts are partly to blame for the bleaching of the coral reefs; one simple product – sunscreen. There are two types of sunscreen, mineral and chemical. Mineral sunscreens mainly use zinc oxide to reflect harmful ultraviolet rays, while chemical sunscreens usually contain avobenzone, benzophenone-3 (also known as oxybenzone or simple BP-3), ecamsule and/or octocrylene. These chemicals are not only bad for the marine environment, but a recent study found that six active chemicals generally found in sunscreen can be absorbed through the skin into the bloodstream. While studies are being undertaken to determine the clinical significance of these findings, scientists do know that oxybenzone lingers in the body and has been found in amniotic fluid, urine and even in the breast milk of both humans and dolphin mothers.

The ingredients in chemical sunscreens have been shown to cause coral bleaching, harm coral DNA, interfere with coral production and threaten the resiliency of coral reefs to climate change. As a result places such as Aruba, Bonaire, California, Hawai’i, KeyWest – Florida, Mexico, Palau, the U.S. Virgin Islands and various recreational cruise ships and liveaboard boats are banning sunscreens containing oxybenzone and/or octinoxate, with more authorities following suit.

So how else can you protect yourself and your loved ones from the UV rays whilst also protecting coral? Azraq, a volunteer-run not-for-profit entity in the UAE, suggests wearing rash guards, wetsuits, broad-brimmed hats and staying under shelter whenever you are not in the water to protect you from harmful UV rays whilst enjoying time at the beach. Azraq has partnered with SurfHouse Dubai, Al Mahara Dive Center, Abu Dhabi and Freestyle Divers, Fujeriah, to provide reef-safe sunscreen options that are available within the United Arab Emirates. The bleaching of coral is preventable and, through simple steps, we as a community can work together to ensure that future generations can enjoy the magnificent underwater world found around coral reefs.

Founded by Natalie Banks, Azraq is a volunteer-run not-for-profit entity in the UAE. Azraq focuses on the protection, defense and conservation of marine life, as well as enabling partnerships to be formed with government, private entities and individuals for the good of the UAE and its marine environment. Born in September 2018, the foundation’s mission is to end the destruction of habitat and slaughter of wildlife in the world’s oceans in order to conserve and protect the marine ecosystem and species. The organisation achieves its goals by educating through awareness programs and motivating the community. The word “Azraq” gives credence to the nation’s mother tongue, translated from Arabic to English as “blue”, defining the marine environment that the not-for-profit serves to conserve and protect.