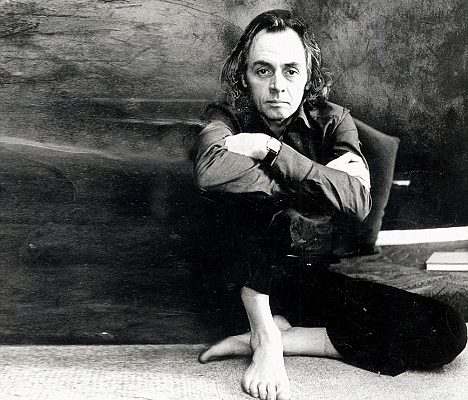 A look at R.D. Laing

Ronald David Laing, better known as R. D. Laing, wrote extensively about psychosis, leading pioneering new perspectives in treatment that changed how other doctors and society as a whole viewed people with mental health problems. By drawing inspiration from different accounts, making cross-disciplinary connections, R. D. Laing was able to push through the established methodology of his time, which was stagnated around enforcing drug treatment upon patients. Laing’s approach enabled a more collaborative approach to treatment, turning on its head the doctrine that patients ‘needed external correction’.

As a Glaswegian, R. D. Laing remained linked to the city throughout his life. Waltraud Pospischil, trustee of the Arkbound Foundation, had the privilege of training alongside him in Scotland and below has written an overview of his approach.

“Perhaps God is not dead; perhaps God himself is mad.” – R. D. Laing

This blog aims to give readers an overall insight into the wide spectrum of thoughts that shaped R.D Laing’s approach, how he absorbed them only to have them critically tried, researched and expanded, giving the world an insight into his unique and timeless stance.

The title quote refers to Friedrich Nietzsche’s thoughts, 140 years ago, initiating European Nihilism or Existentialism –  depending on how a state of despair, or a critical reflection relating to the value system you got born or “thrown into”, is experienced or marked.

Nihilism:  getting forever lost in meaninglessness by departing from the only (accepted) truth.

Existentialism: now you need to ask yourself all of life’s questions, find meaning and answers. But Laing wrote: “No one has the answer: we are answer and question.”

Alienation and angst feature in both. Alienation was introduced by G F Hegel as part of the more or less necessary dynamism, in which absolute Spirit moves, trying to reach a state of self-consciousness and perfection, but which would annihilate Spirit; as only dialectic contradictions are able to keep up the life preserving movement.

Laing saw in alienation the despair and Angst humans get drawn into, which even though it might be associated with a crisis experience, would simply be apparent as soon as men dare to reflect and feel. But for him it goes far further: “Alienation as our present destiny is achieved only by outrageous violence perpetrated by human beings on human beings.”

I can imagine several psychologists disagreeing with Laing, finding his remarks unscientific or even an indication of his own emotional instability. But here Melanie Klein, a famous Psychoanalyst, practising and writing in Scotland after escaping Nazi Germany, would provide support, that a healthy and complex human mind is not usually a happy and content mind. In her near brutal descriptions of the developing young child’s feelings and emotions, she identifies the paranoid-schizoid state, present from birth onward, where a child can only cope with the unknown world of pleasure and pain born into, through mechanisms of splitting and projections. Being warm, fed and cared for is felt as being a complete experience of goodness, while discomfort, hunger and pain become an unexplained hell. For Klein it is an achievement for the young mind to find the insight to see that ‘good and bad’ as experienced, are parts of the same person or situation. The splitting mind would see the mother as an angel when there is pleasure but quickly swaps her for a witch if hunger or pain prevails. Klein calls that ideal state which must be achieved, as a position of realizing that both sides belong to the same person, or that life is not perfect, not being an experience of constant pleasure: “the depressive position”.

Has “normality” overcome the paranoid-schizoid position? “What we call “normal” is a product of repression, denial, splitting, projection, introjection, and other forms of destructive actions on experience…It is radically estranged from the structure of being.” ~ R. D. Laing

Angst and alienation should be able to be felt and fully expressed: “Where can you scream? It’s a serious question: where can you go in society and scream?” – R. D. Laing. It strikes a note of Karl Georg Büchner: “How, can you not hear the terrible screams all around that we call silence?” Georg Büchner: LENZ (1835)

Laing’s rehabilitation of the impulse or need to scream, goes further than Janov’s Primal Therapy idea, where repressed childhood feelings have caused a psychological block which can get dissolved through screaming. “We all live under the constant threat of our own annihilation. Only by the most outrageous violation of ourselves have we achieved our capacity to live in relative adjustment to a civilization apparently driven to its own destruction.” ~ R. D. Laing

Alienation is for him more than a product of capitalism or reminiscent, early life traumas. In our present times of threats to our world, most psychologists would agree that worries and concerns can be a normal state throughout life. But not many would agree with Laing’s conclusion that “Insanity is a perfectly natural adjustment to a totally unnatural and negative environment” or that “schizophrenia is a successful attempt not to adapt to pseudo- social realities.”

Where can we go from there? Is life really nothing more than “a sexually transmitted disease with a hundred percent mortality rate?” – R. D. Laing

“The way out is through the door you came in” wrote Laing, which is a metaphysical statement as much as it relates to every specific problem and distress, we might experience.

But how and when can a “breakdown become a breakthrough?” How will we find the way out if we internalised: “Rule A: Don’t. Rule A1: Rule A doesn’t exist. Rule A2: Do not discuss the existence or non-existence of Rules A, A1 or A2.” ~ R. D. Laing, Knots

Who would help us to wake up if “The condition of alienation, of being asleep, of being unconscious, of being out of one’s mind, is the condition of the normal man.”? When “Attempts to wake before our time are often punished, especially by those who love us most. Because they, bless them, are asleep. They think anyone who wakes up, or who, still asleep, realizes that what is taken to be real is a ‘dream’ is going crazy.” ~ R. D. Laing

Acceptance of pain and the ‘voice of experience’ over theoretical or scientific general conclusions should get you closer to that door lost inside your own self, where the lost and forgotten keeper of the secrets which got you there, which made you lose the key, starts becoming more and more an inaccessible mystery, reminiscent of that dream in Kafka’s novel The Castle.

Laing meets Franz Kafka again by advising you not to avoid existential pain in your life, which comes with being aware and awake: “Du kannst dich zurückhalten von den Leiden der Welt, das ist dir freigestellt und entspricht deiner Natur, aber vielleicht ist gerade dieses Zurückhalten das einzige Leid, das du vermeiden könntest.” ― Franz Kafka. “There is a great deal of pain in life and perhaps the only pain that can be avoided is the pain that comes from trying to avoid pain.” ~ R. D. Laing

Soren Kierkegaard’s notion of the “Fear of the Good” is expressed by Laing as well: “We have to realize that we are as deeply afraid to live and to love as we are to die.” For Laing it is more than an inherent existential crisis, but manmade through generations of repression presented as ‘love’.

It shines a light on how guilt inflicted and seriously suffering humans turn out and evolve, from their very roots and origins which brought them into life and taught them. But for Laing your responsibility to your true self comes top: “True guilt is guilt at the obligation one owes to oneself to be oneself. False guilt is guilt felt at not being what other people feel one ought to be or assume that one is.” ~ R. D. Laing (Self and Others)

And what do you get if you need professional help? – “A psychiatrist who professes to be a healer of souls, but who keeps people asleep, treats them for waking up, and drugs them asleep again (increasingly effectively as this field of technology sharpens its weapons), helps to drive them crazy.” ~ R. D. Laing

But who would want to take the risks of ‘waking up’ in some senses of ‘enlightenment’ even if Laing has convinced you that your greatest pain in life results from avoiding a ‘breakthrough’? That your true inner self keeps on going back to find that secret or forbidden door, not giving up but repeating the emotional stress symptoms and states of mind which get ‘treated’ with medication to make you go back to sleep again, with psychiatric labelling making you scared of your own inner being, with heaping up guilt feelings?

Is there a way out which will not cause chaos? Has our society already successfully created a fool’s paradise, where everyone asking for more than what our massive entertainment industry provides becomes a suspicious outsider already? How should you move not to hurt yourself and those close to you? Who’s able to help you?

Laing still believed it was all there somewhere: “The fountain has not played itself out, the Flame still shines, the River still flows, the Spring still bubbles forth, the Light has not faded. But between us and It, there is a veil which is more like fifty feet of solid concrete. Deus absconditus. Or we have absconded.”

‘Fifty feet of solid concrete’ as a barrier is not very encouraging, just to reach your true inner self and connect with an ever more vulnerable and dwindling ground, earth, or planet we are standing on.

The title of my essay reveals itself as being positive, after how I presented Laing’s philosophy: being mad is not derogatory or diminishes your quality of perception. It needs to be seen as transformative state, reflecting, experiencing, finding an answer for the better future we all really need.

I know that Laing was keen on finding answers in Christian and Buddhist thinking. Back in the eighties he was a welcomed speaker or lecturer at St James’s Church in Piccadilly, London, which has a history of caring for homeless and disadvantaged local people. He also sought out a Buddhist monastery at one time in his life.

As young doctor training in Psychiatry, he spent hours together with patients in solitary confinement units, talking to them, being there with them, when they reached their lowest and most distressing states of mind. “I cannot experience your experience. You cannot experience my experience. We are both invisible men.” ~ R. D. Laing (Politics of Experience)

But Laing knew it’s essential, existential importance: “Our behaviour is a function of our experience. We act according to the way we see things. If our experience is destroyed, our behaviour will be destructive. If our experience is destroyed, we have lost our own selves.” ~ R. D. Laing . He also outlines how often science and psychiatry fail by neglecting ‘experience’. Even the photographic knowledge of a complete dictionary of symptomology, and their approved identifications and classifications of certain illnesses or ‘abnormalities’ might not tell you anything about the patient they get ascribed to: “Schizophrenia is the name for a condition that most psychiatrists ascribe to patients they call schizophrenic.”– R. D. Laing

I felt he was right there recognising me fully without having to know much about me. When I greeted him the first time in my life, I noticed he near mirror-imaged my shy posture with eyes rather looking downwards while talking. I did not feel understood often in life, but right then, after I had left everything in Austria behind me, to come abruptly to London as a 20-year-old student, out of concern for a friend’s state of mind, it struck.

What reveals Laing’s own unique way of acting as Psychotherapist is something expressed in his words: “The psychiatrist must become a fellow traveller with his patient.” ~ R. D. Laing